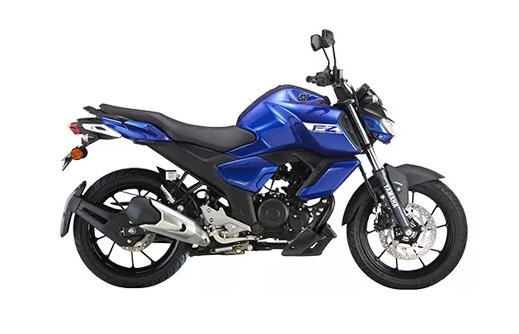 Yamaha FZ FI is a commuter bike available in 1 variant in India. Yamaha FZ price starts from Rs. 1,01,700 (ex-showroom, Mumbai). Yamaha FZ generates 12.2 bhp of power and 13.6 nm of torque from its 149cc engine. Single cylinder engine of FZ has a 5 speed manual gearbox. With both rear and front disk brakes, Yamaha FZ FI has an anti-locking braking system. This 137 kg bike is available in 2 colours.

The FZ is the model that revived Yamaha’s fortunes in India, and since its launch, it has been the gold standard for the 150cc sporty commuter, as far as the sales figures are concerned. It offered a number of new technologies like radial tyres and a centralised fuel tank, at the time of its launch. It is also one of the pioneers of fuel injection, having made the entire FZ range FI at a time when its competitors were still depending heavily on carburetted variants.

The next generation of the FZ is here, and it is not a major update. Single-channel ABS has been added, which is now compulsory, an LED headlamp, and the instrument cluster with white backlighting. The fuel injection has been tweaked to offer better midrange but the peak power output remains the same at 13bhp and 12.8Nm. The split seat has strangely regressed to a single-seat, despite the overall design becoming a little more aggressive.

In the latest update, the company has launched the BS-VI variant of the motorcycle that now gets a BS-VI compliant powerplant. The engine continues to be the same 149cc single-cylinder air-cooled unit with fuel-injection that now produces 12.2bhp at 7,250rpm and 13.6Nm at 5,500rpm. Transmission duties continue to be handled by a five-speed gearbox.

The FZ competes with other commuter-oriented sporty motorcycles in the 150-160cc segment like the Honda XBlade, Bajaj Pulsar NS160 and TVS Apache RTR 160 4V.